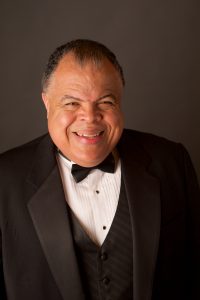 Anton Armstrong, Tosdal Professor of Music at St. Olaf College, became the fourth conductor of the St. Olaf Choir in 1990 after ten years in Grand Rapids, Michigan, where he had served on the faculty of Calvin College and led the Calvin College Alumni Choir, the Grand Rapids Symphony Chorus and the St. Cecilia Youth Chorale.   He is a graduate of St. Olaf College and earned advanced degrees at the University of Illinois and Michigan State University.  He is editor of a multicultural choral series for Earthsongs Publications and co-editor (with John Ferguson) of the revised St. Olaf Choral Series for Augsburg Fortress Publishers.  In June 1998, he began his tenure as founding conductor of the Oregon Bach Festival Stangeland Family Youth Choral Academy.

During 2016-17 season, Dr. Armstrong will serve as the President of the Choral Jury for the Busan International Choral Festival, Busan, The Republic of Korea.   He has been selected as Conductor of the 2016 NAfME National Honor Choir  in Texas, as well as Conductor of the 2017 Wyoming All-State Mixed Choir and the 2017 NAfME All Northwest Mixed Choir and as a guest conductor of the 2017 Zimriya-The World Assembly of Choirs in Israel. Additionally, he will lead choral festivals at Carnegie Hall, New York; Yale University; Segerstrom Center for the Arts, Costa Mesa, CA; and Davies Symphony Hall San Francisco.   Other guest conducting/lecturing engagements in 2016-2017 include appearances in Minnesota, New Jersey, Colorado, and Pennsylvania.  In March 2017, The St. Olaf Christmas Festival, one of the oldest musical celebrations of Christmas in the United States begun in 1912 by F. Melius Christiansen, founder of the St. Olaf College Music Department will be featured by invitation in two major performances at the National Conference of the American Choral Directors Association in Orchestra Hall, Minneapolis, MN.  Since 1990,  Anton Armstrong has served as Artistic Director of the Christmas Festival which features nearly 600 student musicians who are members of five St. Olaf Choral ensembles and the St. Olaf Orchestra.

In January 2006, Baylor University selected Anton Armstrong from a field of 118 distinguished nominees to receive the Robert Foster Cherry Award for Great Teaching.  He spent February-June 2007 in residency at Baylor University as a visiting professor.  In March 2007 Anton Armstrong was the first recipient of the Distinguished Alumni Award from the American Boychoir School and in October 2009 he received The Distinguished Alumni Award from Michigan State University. In June 2013 Dr. Armstrong received the Saltzman Award from the Oregon Bach Festival.   The festival’s highest honor, the Saltzman Award is bestowed upon individuals who have provided exceptional levels of leadership to the organization.  In the Fall of 2014, The St. Olaf Choir and Dr. Armstrong received a Regional Emmy for the PBS television program Christmas in Norway with The St. Olaf Choir.