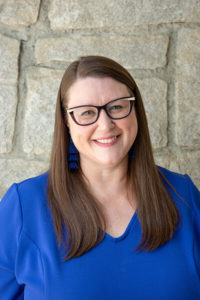 Since 2008, Emily Floyd has served as Director of Music Ministries at Shallowford Presbyterian Church in Atlanta, directing a 75 member adult choir, 85 member youth choir, and supervising  handbell choirs and children’s choirs. In addition to church work, Emily is on the faculty at the Choristers Guild Institute.

She frequently serves as a guest conductor for honor choirs and schools in America and Canada.   Emily serves as guest conductor for summer worship conferences, such as the Montreat Music Conference, Lutheridge Music Conference, and the Association of the Guild of Organists.  She has presented workshops for ACDA, Choristers Guild, Fayette County Schools, and the One Song Church Music Conference. Choirs under her direction have performed in such international venues as St. Giles Cathedral in Edinburgh, Scotland, St. Mark’s Basilica in Venice, Italy, St. Peter’s Basilica in Rome, Italy, Spivey Hall in Atlanta, and Carnegie Hall in New York. The Shallowford Youth Choir has sung in 17 states in the U.S.A. and tours in Scotland every 4 years.

Her 2020 engagements include speaking at the National Association for Organists Conference and at the National Conference for the Hymn Society.  She will be featured in a few webinars for the Choristers Guild.  In addition, she will conduct several GMEA honor choirs and the Georgia Statewide Elementary Honor Choir.

Emily attended the Florida State University and received the Bachelor Degree in Music Education (voice) magna cum laude. Emily has taught choral music in public schools and directed church choirs of all ages in Florida, Illinois, and Georgia. Emily is passionate about reaching as many young singers as possible (“drawing the circle wide”) and awakening their inner choral artist. She is a member of the American Choral Directors Association, the Choristers Guild, and the Presbyterian Association of Musicians. She holds the Choristers Guild Children’s Choir Leadership Certification. Emily resides in Atlanta, Georgia with her husband Rev. Dr. Richard Floyd and their two teenage daughters.